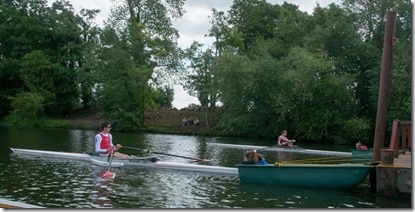 A number of rowing clubs with adaptive programmes have developed a system of individual athlete time-handicaps to provide more competitive, equitable and enjoyable racing. The system was pioneered by Marlow Rowing Club and Guildford Rowing Club, but an increasing number of clubs have adopted it (eg. City of Oxford, Maidenhead) for their adaptive competitions.

THE PROBLEM – GRANULARITY VS. NUMBERS

The time handicap system addresses the problem of the granularity of classification versus population of competitors. The more finely you define a classification, by definition, you get fewer competitors. In the emerging world of adaptive rowing where there a relatively small number of participants, defining competition categories in a very tight ways means that the person who fits into that category often has no one to race against. You can take pride in being the best Female Congenital Leg Impaired Rower Between 30-40, but you won’t find anyone to race against.

On the other hand, once you start to define the categories more broadly, then you get the opposite problem of wide disparity of ability. This problem is most acute in the broadest pararowing category of PR3 (which used to be “LTA” for “Leg Trunk Arms”). It includes everyone from someone with a fused ankle to spinal injury wheelchair users.

This issue exists in the non-adaptive rowing world as well as for other sports (eg. weight categories in combat sports). Age bands for juniors and vets are always a bone of contention. But the issue does seem to get amplified in the adaptive world. One not only has the conventional disparities of capability (eg. gender, age), but also dramatically differing impacts of impairments on an athlete’s capability. Conditions like spinal injuries and cerebral palsy can have dramatically differing degrees of physical impact.

One of objective of the time handicap system is to make for more competitive racing with closer finishes. Prior to the system, adaptive races had some of the largest margins of differential between competitors. These results were unsatisfying for both the winners and the losers. The losers felt bad losing by so much and during the race felt frustrated that it was hopeless to catch their opponent. Conversely, the winners felt bad winning by so much and often ended up coasting home which didn’t make for much of a race for them either. Since the introduction of the system, a large percentage of the adaptive races have finished within a boat length. These result not only make for more gratifying competition for the rowers, but also more exciting events for the spectators. A number of the adaptive rower have reported doing the best racing of their lives because they had the pressure of stiff competition and the loud cheering of the crowd right down to the finish line.

A key characteristic to the approach is the collaborative and consultative approach by the coaches in advance of a race. The system is not robotically mathematical. Instead, the data is there to inform the handicaps being applied, but the ultimate handicaps are approved personally by the coaches entering the athletes.

The system of individual time handicaps means that one’s competition “pole position” is entirely tailored to that individual. We maintain a master database (see snippet in graphic below) of all reported recorded times of adaptive athletes in the UK both training and competition. These times are used to determine the benchmarks against which time handicaps are calculated. If Athlete A rows 500m in 2:30 and Athlete B rows 500m in 2:40, then Athlete B is given a 10 second head start at the beginning of the race.

One advantage of this approach is that the rowing world is already accustomed to the use of time handicaps in Masters and Veteran competitions. As a result, the umpires and marshals have an established process in place for starting boats at different time intervals.

Having now trialled the system for 2 years in the Thames Valley area, we’ve picked up a number of lessons about refining the effectiveness of the system.

The time handicap system is under constant review and examination. If you have thoughts about how it could be enhanced, please leave them in the comment section.