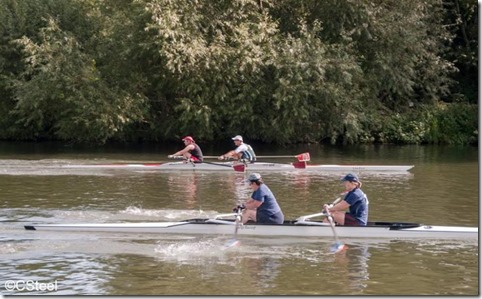 The first and the biggest. The City of Oxford Regatta continues to pioneer ever more ambitious opportunities for adaptive racing. City of Oxford Rowing Club ran the first ever adaptive race in the UK back in 1999. On Sunday, it presented a full slate of heats, semi-finals, finals and repechage events with a total of 19 races which is the largest ever in the UK.

The event was boldly ambitious and by pushing the adaptive racing to its limits, we learned lots about managing such events. The schedule did require some juggling due to some conflicts that resulted primarily around equipment. Equipment constraints will always be a bottleneck for adaptive rowing as there is less flexibility to swap in alternative boats. Fortunately, the flexible racing format of the day meant that race officials were very able to slot folks into just about any order.

The event also provided ever more intense exercise of the time-handicap system. Each with the system not only provides new lessons about how to make things run more smoothly and effectively, but also collects more data on the adaptive athletes participating allowing us to have a more accurate measure of their expected time on which to base the handicaps (again, massive thanks to the race marshals and officials for their consummate patience and support when things got complicated).

The results were a further validation of the potential for the system. We have always said that one of the top objectives was to have the majority of races finish within a boat length and the majority of racing on Sunday did. The Mens 1x Semi-Final was a photo finish, and the Womens 1x Final was less than a canvas.

One of the aspects that I like about the system is the sense of potential. All the athletes go into the races thinking that they have a chance to win it. This is in no way true in the conventional rowing world (or even much of the general sports world). Lots of rowing squads compete for the fun, challenge and experience, but they know from previous outings or their training times that they simply are unlikely to prevail on the day barring any exceptional circumstances. On the contrary, with the adaptive time handicap system, everyone goes to the start line thinking ‘well, if the guys have gotten the times reasonable then I might just have a shot’. And that sense continues through the race. When you start behind, you are thinking ‘well, I should be able to catch up’ (according to the times). If you have a head start that is eroding, you think ‘I might just be able to hang on’ (even though the competitor is powering toward you). The competitive spirit in the adaptive rowing at City of Oxford Regatta is higher than most rowing races I have been a part of.