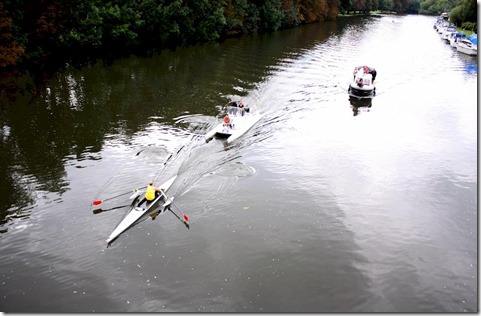 Rowing is classified as a “strength endurance” sport, so the ordinary distances are not small. Events like the Great Ouse involve come seriously heroic mileage. But few things in the conventional rowing world (ie. putting aside things like transatlantic crossings in specialised row boats) come close to rowing the 165 miles of the Thames River from Lechlade to Gravesend.

The challenge in so big that the few people who attempt it tend to be relay teams who take it in pieces or they make an expedition out of it with plentiful food and rest breaks. But, Naomi Riches MBE didn’t just seek to row the Thames, she didn’t just seek to row it entirely on her own, she also decided to break the Guinness World Record for rowing it. That record stood at 43 hours and 41 minutes. The Guinness officiators do tend to break athletic achievements into men’s and women’s categories. The thing is that no woman had ever completed a certified solo row of the Thames to set the mark. So, Guinness set a benchmark based on a percentage of the men’s time that she would have to achieve in order for it to be considered a record for a woman. And that is all women. Naomi demonstrated that even with disabilities like her visual impairment, para-athletes can accomplish athletic feats of world-class calibre for any human.

What the record attempt means is that it is not just 165 miles of rowing (a monumental amount in any reasonable span of time), but it also means practically no sleep and very limited opportunity to simply stop rowing and stretch one’s legs. It is pretty much non-stop rowing for 2 days!

Naomi’s Great Thames Row is the crowning achievement to her stellar achievements in rowing. Many people in Marlow think that the gold mailbox on the High Street is in honour of Sir Steve Redgrave, but actually it commemorates Naomi’s gold medal win in the London 2012 Paralympics (LTA 4-). Growing up in Marlow and rowing for Marlow RC, she is a bit of a patron saint for the adaptive squad. She remains active in supporting the club and the para-rowing there.

For an intro to The Great Thames Row itself, check out the video below…

She’s been especially busy of late, but she still found time to do an exclusive interview with Adaptive Rowing UK on the anniversary of her World Record achieved 1 year ago today and certified by Guinness just this week (the adjudicators had to authenticate and validate reams of data, testimonials, and records to confirm that Naomi actually did complete the entire row in conformance with the tight guidelines issued by them for such a challenge)…