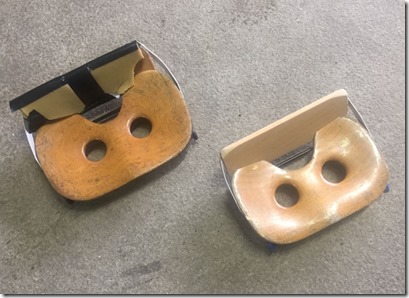 More master craftsmanship from Marlow Rowing Club “Gaffer in Chief” John Stephenson. The Fixed-Back Sliding Seat has been a great success for a number of our adaptive rowers, but over time their own bodies have adapted with the regimen of regular rowing exercise and now with greater capability and different demands, we looked at a variation of the FBSS which is probably best described as a “Low Back Sliding Seat”.

Once again, female LTA Zoe Berwick has been to inspiration to John to create this “low back” sliding seat in the first place. When Zoe first got into a sculling boat, she struggled simply to hold herself up. We were surprised by this difficulty because she had managed erging quite effectively. But it turns out that the tension in the rowing machine chain was giving her just enough support to help her keep upright. Hence, we designed the Fixed-Back Sliding Seat to support her. But over the past year or so, her workouts and training have developed her core to the point that now she is able to support herself…almost. When trying a conventional flat seat, she fed back that it was a bit too difficult still. She wanted just a bit of support at the bottom of the back. John was on the case and came up with the seat you see above and below (the two versions are a seat for her single and a seat for her double).

It turns out the design benefits another one of our FBSS users – Arwel Rowlands. He had opted for the FBSS not because he needed the back support, but he needed the bottom stability. His incomplete spinal injury left him with impaired sensation in his legs so he had trouble determining where he was on the seat and found himself slipping regularly. The back rest provided a vertical dimension of securing his body into the seat at the expense of reduced back rock. But the low-back sliding seat provides the same positioning benefit without the back rock limitation.

We haven’t put together directions or an instructional video for this version because the design and construction is so simple that it is pretty self-explanatory. The metal band is a strip of aluminum sheeting cut and bent to provide the extra support from the side. If there are any questions, feel free to forward me an email.