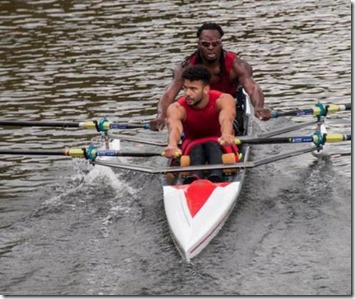 Bedford RC advance adaptive rowing in the UK a few more paces with some milestone racing at its Bedford Autumn Small Boats Head.

Time Handicapping – The Time Handicap system got pushed to new lengths with its longest race ever applied to (1000m) and its first Head race used at. The system was just used for the single scull event (the double scull seemed too complicated to estimate and the boats seemed reasonably matched). At the end, the time adjusted finishes for the competitors were within a few seconds of each other. Close racing results has always been the top objective for the system and the Bedford event seemed to prove its potential at even longer distances.

Supported Adaptive Double – The popularity of the “Supported Adaptive 2x” event (one adaptive rower with one non-adaptive rower) grew to its biggest pool with 6 entries competing. In addition to the sheer size of the field, the entries included some novel combinations including the WTA/VetE (my boat with Sophie Brown) as well as an AS/TA. The AS/TA from Marlow was probably the first double fixed seat boat to compete in an open regatta/head race in the UK.

Congratulations to Guildford and Chris Boys for his deuce!…