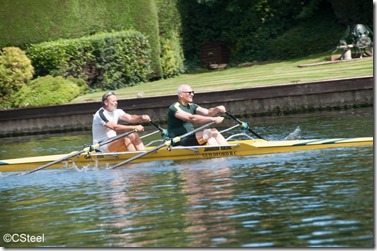 Adaptive racing has traditionally been a solitary affair. Due to limitations on number of the athletes as well as reconciling diverse impairments, nearly all adaptive regatta events have been in single sculls. Also, due to adaptive rowing still being in its early days, most clubs supporting adaptive rowing have only a few rowers and sometimes a single athlete.

One exception to the single scull predominance have been visually impaired (VI) rowers. Often these athletes rowed in double sculls with a sighted rower in bow for steering. Also, some other impairments required in-boat support such as learning disabled (LD) individuals who had troubles steering and especially weak or unsteady individuals who had trouble moving or controlling a boat by themselves.

In recent years, mixing adaptive with non-adaptive rowers has become increasingly prevalent. Never mind about the adaptive world, but for any rowing my favourite way to introduce someone to the sport is for me (the coach, experienced rower) to sit in the bow of a double to guide and direct the learner hands-on, on the water. The adaptive world provides all of the previously noted advantages for certain impaired rowers, but also just expands the base of rowing teammates for all rowers. Given the smaller number of adaptive rowers, this is a huge advantage.

Like many aspects of the adaptive world, finding the right label is a bit of a challenge. The event tends to be called a “Supported Adaptive 2x” (Sup Ada 2x). It is sometimes called a “Mixed Adaptive 2x” (Mx Ada 2x), but this can lead to confusion as the “Mixed” term in rowing tends to refer to mixing men and women in a boat. The Head of the Charles event calls it an “Inclusion 2x” (I chose to use “Supported” in this piece just because that seems to be the most prevalent term in the UK at the moment).

Time handicapping remains the same in principle. Determine the recorded speed of the boat and then calculate distance time deltas based on the differences. The time handicapping system is inexact to begin with and doubling the athletes involved only compounds this difficulty. Furthermore, there tends to be less race time information about Supported 2x teams because (a) the event has really only picked up in the past year, and (b) people often mix combinations around with each race making few like-for-like comparisons. Hopefully, as with the handicapping system overall, more experience and more data will make it easier to level the competition field in this category as well.

The most frequent question that gets asked is “Do you mirror the rowing technique of the adaptive rower, or do you row ‘normally’?”  In other words, rowing with a TA or AS rower who doesn’t use their legs, “Does the non-adaptive rower you their legs?”  The ultimate answer is that you adapt.  You work together and figure out the best way to work to get the optimal aggregation of power and speed.  Especially, after some of the recent Supported 2x events (eg.  Bedford, Pairs), most combinations have been deployed – TA+nonAda, AS+nonAda, TA+AS, mixed, etc.  The key to the teamwork synchronicity is getting the blades in together at the catch and out together at the finish.  In my personal experience, sometimes I do take a longer stroke that the adaptive athlete, if I can get through the longer distance in the same time as my partner (who might have less power).  At the Pairs Head rowing with Kingsley, he has a pretty long stroke for an AS rower and I rowed sort of a 3/4 slide with less arm finish to match his “stride”.

Supported 2x can more than double the dividends to rowing clubs. It’s not just the para-athletes that benefit, but the other rowers in the club as well who get involved. The award-winning Guinness advert below shows that the “adapt” in “adaptive” doesn’t always have to be about disabled athletes adapting to convention, but can also be about convention adapting to them.  Like the video, I actually think there would be some potential in putting non-adaptive rowers into TA (fixed-flat) and AS (fixed-backed) seats to “level” the field.  Unfortunately, the challenge this approach is getting more of the adaptive gear (eg.  specialised seats and the specialised boats which accommodate them), bit watch this space.