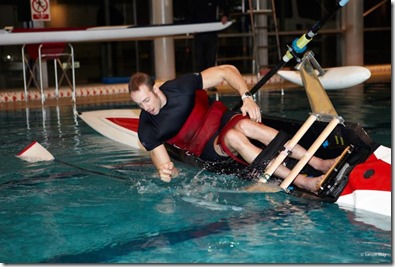 Marlow Rowing Club held one of its periodic capsize drills last month and had a chance to drill three of our fixed seat athletes.

Some people think PR1 is less risky because of the nature of their stroke (shorter range of motion so less to throw off the balance of the boat) and the presence of safety pontoons. And while the incidence of capsize might be the lowest, the severity is definitely the highest.

Risk is a combination of (a) incidence (how often or likely), and (b) severity (how bad when it does happen). A PR1 who capsizes both (a) has the most work to do to free themselves from the boat (3 straps plus feet), and (b) by definition has the highest degree of impairment to impede extraction. For example, a PR1 rower might lack the core strength or control to reach down to the foot straps or even the furthest lap strap. In one of the drills we did yesterday, the athlete thought they had released the lap strap, but they hadn’t and got caught up in the extraction. One reason they got confused is that they lacked sensation in the legs so they couldn’t feel that the strap was still holding them.

Despite the safety pontoons and stroke action, PR1 athletes can and do capsize. A very notable PR1 capsize took place a couple of years ago at a rowing camp run by British Rowing. The incident led to a full scale inquiry as to how it happened. One of the issues turned out to be that the pontoons hadn’t been set up properly. And this is the most likely scenario for a capsize with the presence of stabilizing floats – equipment failure. Any number of parts can break on a boat and if the wrong part breaks it could severely impede the boat’s stability and cause a capsize. But any number of other events could produce a capsize even with the protection of floats, most notably collisions. Not just collisions of the boat into fixed objects (eg. bridges, banks, fallen trees, floating logs, anchored boats), but into moving ones as well (eg. rowing boats coming the other direction, inattentive motor boats).

This article is not intended as a comprehensive “how to” guide to PR1 or fixed seat capsize drills. British Rowing actually runs special courses in conducting capsize drills and anyone who wants the comprehensive understanding of their operation and issues, should attend one of these. This piece is just to share a few personal perspectives on (a) the particular importance of capsize drills for fixed-seat athletes, and (b) a few considerations and tips for conducting those drills.

If your club has a PR1 capsize, it will attract a huge amount of attention from British Rowing and one of the first questions will be whether the athlete had undertaken a capsize drill.