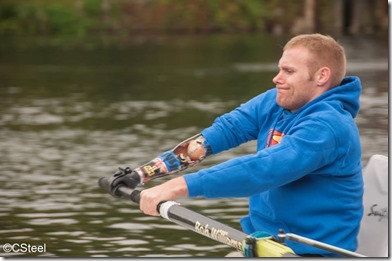 I often assert that rowing is one of the most physically inclusive sports there is. Its curse – of being a full-body strength-cum-endurance sport that has your whole body screaming for oxygen and glucose at once – is also its inclusive blessing. Being a “full body” sport means that if some part of your body goes awry, you can just use the rest of your body. The one exception would seem to be arms. Arms are the connection between the body and the boat. Problems with those would seem to be showstoppers; but it turns out that there are plenty of adaptations to arm impairments. And while I have not yet met a rower with no arms, I actually do know a way that they could row (stay tuned for a future post).

At Marlow RC, Zoe Berwick has arm impairment which introduced me to the support aid of ActiveHands which can help a range of hand/grip issues. The most acute impairments I have observed were at neighbouring Maidenhead Rowing Club Adaptive Regatta where both Mark Ormrod MPSA (above) and Steve Bloyce (below) competed. Mark is an Invictus triple amputee and Steve described his impairment, “My right arm has the ability to flex the wrist and the bicep. I can extend the arm using the medial head of the tricep, but have no ability to extend the wrist. My wrist extensors on the radial nerve are not firing in my right arm.”

I caught up with Mark, who shared some of his perspectives on rowing with an arm impairment:

Mark makes a great point about the option of “sweep” rowing. Most adaptive rowing is sculling. The Paralympics does have a Mixed 4, but you don’t see sweeping hardly at all outside international competitions. If you go for a Four boat, then you need enough adaptive athletes to fill the seats and many rowing clubs have only a few adaptive rowers at this stage. On top of that, the athletes tend to have quite varying impairments and when you put them all together in a crew boat, they can cause lots of difficulties for coordination between the rowers (We at Marlow found this to be the case when we experimented with a 4+ boat last year).

The other sweep option is a Pair (2-) boat. It requires fewer rowers, but it is quite simply the hardest boat to set up in the entire sport. Two rowers working as one to create, in essence, a single scull equivalent. The wider adaptive boats can mitigate (especially with safety pontoons attached) the most challenging problem of setting up the boat. This setup can be another opportunity for a “Supported Double” arrangement (an adaptive and non-adaptive rowing together). This is how Steve rows at Maidenhead (see picture below) and it is very effective.

And you don’t need a set of Pair riggers for this approach. Neil Lawson at the City of Oxford Rowing Club does single arm rowing with a partner using a Double sculling boat with a single blade each (see video at bottom).

The very first question for sweep rowing is “which side?” Neil observes, “I assume most arm impaired rowers sweep oar with the outside arm for mechanical leverage. I have had much debate with my masters rowing partner who thinks I should row bow side using the left hand in the inside. I’ve yet to try. Using a double scull with a single blade evens the power and handicap for able bodied too. It is also a training exercise used by the juniors coach.” As with most aspects of adaptive rowing, “your mileage may vary” with your own particular circumstances and the best approach is to experiment with both.

While a Supported “2” boat works great, it would be also fun to get two adaptive rowers together. The challenge there is not just getting two rowers with acute arm impairments, but also having them on opposite sides. We’ve wanted to bring some rowers together in the Thames Valley area, but it seems like everyone has a right arm impairment. Neil got his impairment in a motorcycle accident and he quipped that “We need to partner with our European colleagues who drive on the other side and suffer left arm injuries.”