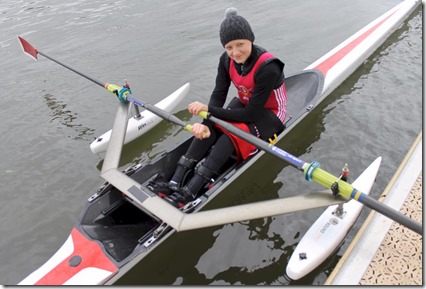 Most adaptive fixed seats are designed as dual purpose PR1 (with supported back) and PR2 (where the back piece detaches to become a flat seat. Furthermore, the seats are often quite wide to accommodate the broadest range of athletes possible. The problem with this wide design is that such seats will only work in correspondingly wide boats.

The “Wide Body” single has been the cornerstone of the adaptive fleet for years now. Its own width provides stability as well as the ability to accommodate the fixed seat apparatus. Unfortunately, the wide-bodies present a few challenges:

All of the above issues confronted Great Marlow School’s PR2 rowers Mateusz Stan and PJ O’Donovan. They train both with their school and with the Marlow RC adaptive squad. GMS had a sleek Wintech that they could use. The boat accommodated safety pontoons so the narrow boat design was not an issue for stability with those attached. At the outset, the boys just rowed on a conventional sliding seat even though they weren’t using any leg power. Obviously, this approach provided an unstable seat that shifted and wiggled constantly with each stroke. Then we just took the sliding seat out and had them sit on some yoga blocks covered in foam. Despite looking like a Blue Peter project (like so many good adaptations), they were still not optimally comfortable or stable. So we decided to craft a custom flat fixed seat that would fit a standard sleek single.

Thanks to a generous grant from the Marlow Roundtable, Marlow RC was able to design and commission a custom “TA seat” that was essentially identical to a standard one only narrower. Instead of a width of 370mm for the Draft fixed-seat, it is 240mm (about a third narrower) plus about 100m total for the bolt heads and strap widths attached to the outside of the frame. That means is can fit in a Wintech fine single which measures 455mm (75kg rated) as opposed to the Wintech Explorer 21 which is a full 560mm.

Matt and PJ tested the seats in training last week and in competition at the Phyllis Court Time Trial were chuffed with how it worked (see photo at top).

Below is a step-by-step guide for ordering and assembling such a seat:

Essentially, the seat is an assembly of 4 components…

Voila, the final seat shown below. Approximate cost £190 (plus shipping and VAT).