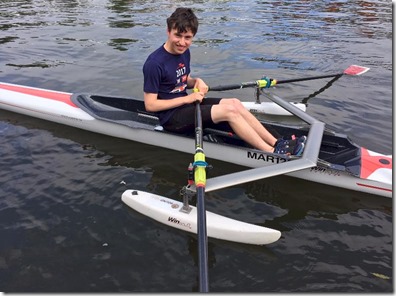 What’s wrong with this picture? Or in other words, find the deliberate mistake.

Give up? The port side pontoon is affixed “backwards”. Don’t worry if you didn’t spot it. I’ve had many an adaptive boat set off with one of more pontoons on the “wrong” way around. But this time, with Sebastian Johnson (PR3 Junior at Marlow Rowing Club) heading out, it is with a purpose.

Sebastian has a brain injury which has left him with left arm impairment and other coordination issues. One major challenge for him is steering a scull with one arm stronger than the other (and “hanging on the oars” using less arm effort in general is also a coordination challenge for him). It is not a novel problem. Zoe Berwick also has right arm impairment from her spinal injury and has also struggled with steering.

One day we set the pontoons to low into the water which creates quite a bit of drag. His father, Christopher, who had joined me in the coach’s launch asked, “What would happen if we had one pontoon faced the opposite way to drag one side of the boat (Seb’s storng side)?” What an idea. And I had no idea what would happen. So this past weekend, we tried it at our training session. And, yes, Sebastian found it considerably easier to keep the boat going straight.

It’s obviously not ideal in that, by definition, it adds considerable drag to the boat. But in rowing satisfaction and success, keeping the boat rowing straight is more important than sheer boat speed. Also, Sebastian is a reasonable fit young lad, so power is less of an issue for him and he can afford a bit of drag.

Advances in material science and electronic miniaturization have revolutionized adaptive prosthetics and aids to disability in recent years. But not every adaptation needs to be an engineering marvel. A simple adjustment can have comparably effective results. When I toured the Soyez space center outside Russia, the guide delighted in sharing the story of how NASA spent a million dollars to invent a pen that would write in zero gravity, but the Russians decided to use….a pencil. Even though the story is completely apocryphal, I nonetheless applaud the spirit of simple ingenuity to fix or improve things.