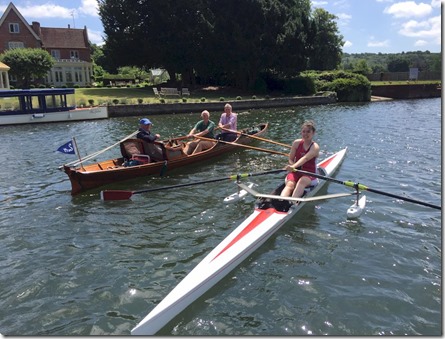 Pat Davis continues to inspire the generosity and initiative in getting the disabled community onto the river. She sadly passed away last year and a group of fond and enthusiastic supporters organized a memorial row in her honour. Ralph Hope, James Newcomb and Ed Burroughs from Runcorn Rowing Club rowed 110 miles (and 33 locks) of the Thames from Cookham to Oxford and back in a restored 1895 skiff named ‘Tara’. Last year their sponsored row raised money for their Impact Foundation which provided for about 375 operations to restore or repair sight, hearing, mobility, fistula, hydrocephalus or cleft lip.  This year they hope to raise £10,000 for the Rivertime Trust.

Pat is also the individual after whom Marlow Rowing Club’s adaptive single “Rivertime Pat” is named so one of Marlow’s adaptive rowers who uses the boat regularly, Zoe Berwick, provided a flanking escort to to Tara for the Marlow-Bisham stretch.

Ralph shared the following report of the successful venture: