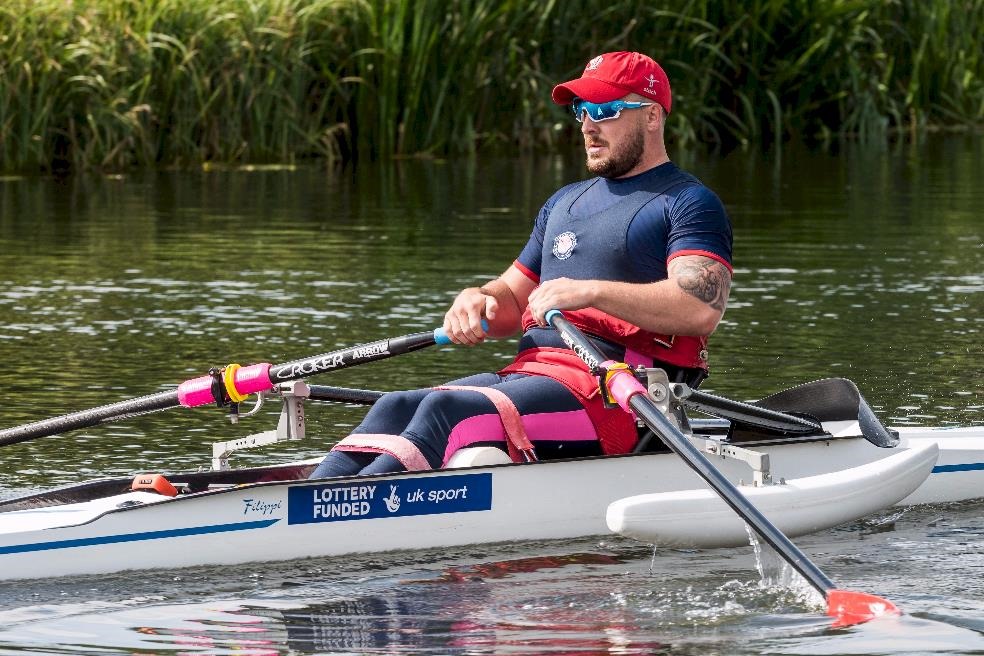 Sudbury Regatta hosted the largest adaptive field yet for this event underscoring its commitment to growing the event. The common denominator was that all the competitors were fixed seat athletes (which tend to be fewer in number).

Marlow’s Kingsley Ijomah set a new course record for PR1 in the heats with a time of 3.35 which also bested his rival Twickenham’s Ben Pritchard who clocked 3:39. Both are shooting for international competition with Ben on the British Development squad for pararowing, and Kingsley rowing for the country of his birth, Nigeria. Unfortunately, it was one of the shortest lived records on record. In the final, Ben smashed it taking home the cup, the new course record, and the Sudbury Shield for his achievement (see photo bottom).

I caught up with Ben after the event and he provided a first-hand account of the sterling day:

“Unlike the international stage, the domestic adaptive scene can be a little scarce at times, with athletes often having to race out of class; usually being smoothed by the introduction of a time handicap system. However, a little birdy told me that at Sudbury Regatta would be different and I would get the chance to race against not 1 but 2 other PR1 Males (Kingsley of Marlow and Luke of Sudbury) along with one PR2 female (Sophie of Sudbury). Delighted, I decided that the trek to Suffolk would be worth it and decided to enter. The drive to Sudbury is relatively easy and people should not be put off on how far this looks from the Rowing ‘Home Countie’”, door to door from East London was just over an hour and believe Ella Willott and Kingsley made it from Marlow / Bracknell in just over two. Besides it is very picturesque when you arrive, so definitely worth it! My advice to those in a chair – take your freewheel, if you are a social butterfly and want to get involved in cheering on others you will need this to navigate the meadow unless you are an expert at back wheel balance. The 650 metre course is held on a meandering river encompassing an 80 degree bend and crews were stationed on either the Suffolk or Essex stations. First up were Kingsley and Luke, with Kingsley taking the win. Then Sophie and I commenced battle down the course, at the bend I was ahead and thought to myself time to take this home and in an attempt to turn on the afterburners managed to get myself caught in the reeds. Despite the initial panic, I navigated my way out and managed to take the win despite Sophie putting in a great performance. As many of you may know Kingsley and I have a great friendship which in turn creates a great rivalry and so getting to face him in the final was very special. He is adamant that before Saturday I had never beaten him, although this is up for debate. Unusually unlike any other regatta, Sudbury RC had offered Ella Willott to commentate on the race. Who better than a coach that spent a year having to put up with Kingsley and I (Double Trouble). So we took to the water ‘mano a mano’ to settle the debate. I had the inside of the bend (Essex) and Kingsley the outside (Suffolk). “Marlow, Twickenham – Attention!” we were off. Since training with Kingsley last year, he has certainly spent the winter working on his ability to rate and he was off the start at what seemed like 100. I tried to match him rate for rate but decided I needed to focus on my own stroke and settled back down to my usual 32. Half way up the first straight it was neck and neck – we took the corner and still nothing to it. Having got the better line around the corner the time was right and dug in for 10 strokes. A gap opened and I pushed on. BEEP. I crossed the line followed closely by Kingsley. I believe the Kingsley v Ben series is now at 2 -2. But Kingsley will say 2 – 1. Next up for me is City of Oxford on the 19th August and look forward to seeing you all there.”

The organisers continued to learn how to make things work ideally, but generally, they reported to me that everything went easier than expected and was a “great day for all.”