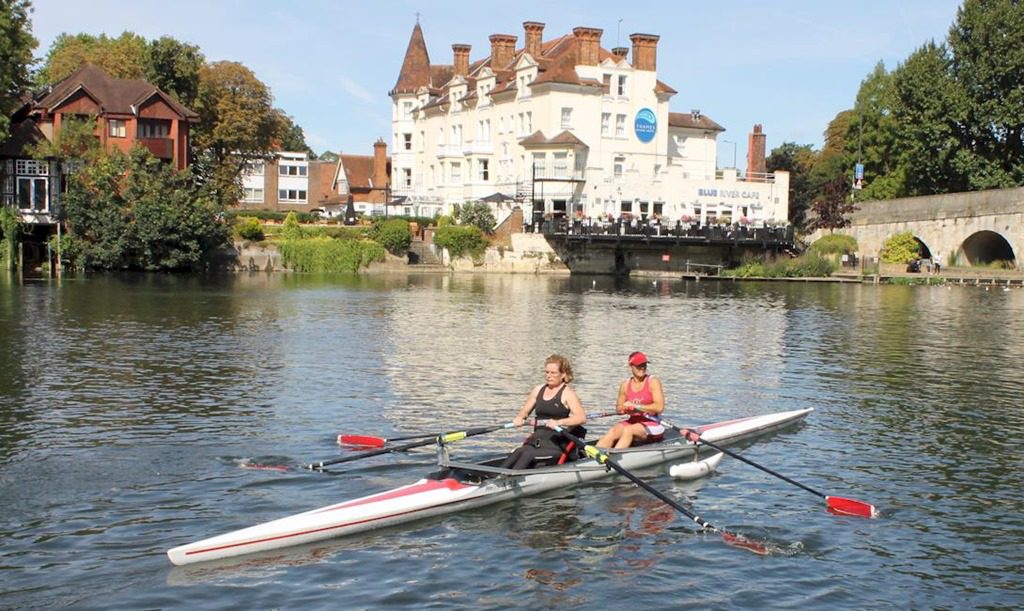 Maidenhead continues to push the boundaries for adaptive racing at their always superb Maidenhead Regatta, but not without a few challenges. They really pushed to maximize the number of adaptive athletes doing the most racing, but more racing with more adaptive kit means more moving parts, more complexity and more chances for glitches.

Their major innovation was integrating adaptive events into the general flow of the racing programme. Most of the time, adaptive events are segregated into a sort of their own mini-divisions. This concentration allows for the regatta to reset their focus on the specific requirements of adaptive racing (eg. managing time handicaps, setting up guide boats, sometimes starting from a different position in the river). But with everyone going off at the same time, it limits the ability of athletes to enter multiple races (eg. doing a Mixed Supported Adaptive as well as doing an Open Supported Adaptive or Womens Supported Adaptive). It also precludes the ability to share boats (because they are all needed on the water at the same time).

Maidenhead set up a classic heat/semi/final structure the racing with all the racing interspersed in the racing schedule. This meant, for example, that Katinka Ernst from Worcester could do both the Open Supported Adaptive race (with Stratford-Upon-Avon) and the Mixed Supportive Adaptive race (with Marlow). It also meant that Marlow could enter two supported adaptive double races for athlete that both required its wide-body adaptive 2x. Furthermore, Marlow was able to end that boat to Stratford-Upon-Avon for yet another race. The tiered racing and boat sharing did create a couple of glitches in the time handicapping and management of the boats.

One lesson learned was “Do not go to the start line without your opposition”. City of Oxford Regatta enforces this protocol and it is effective in keeping people from having to sit on the water if some logistical problems occur (which are more likely in adaptive racing).

Another lesson learned is how critical up-to-date and accurate data is for making the time-handicapping effective. Unfortunately, the only major timed event earlier in the regatta season is the Phyllis Court Time Trial. Rough conditions on the day of that event as well as some other complexities made that data hard to use for comparing to other registered times. Unfortunately, the two other big adaptive events prior, Marlow Spring and Marlow Town, only take result and not times. Another lesson might be that Marlow should try to round up a couple of volunteers to do some basic bank timing of the adaptive races to provide time handicapping info for racing throughout the summer.

With the advent of the maximum 30 second time handicap, a final learning was the need to split some events into “A” and “B” races for those individuals whose time is greater than the 30 seconds. Clustering the slower boats together would allow for time handicapping to create competitive races among them.

A final bit of adaptive racing didn’t even take place in the adaptive events.  Adaptive rowers entered some of the non-adaptive events.  Ben Marsden of Marlow competed in the Open 1x, and Ella Holloway of Marlow competed in the Womens Open 1x.  But also, these athletes are rowing in the club crew boats.  Ella Holloway competed in both the W.Sen.4+ and W.Sen.2x races for Marlow.  And Steve Bloyce of Maidenhead raced in the E8+ which rowed a cracking race against Marlow losing by only 3/4L.  Watching the race, you would not know that (a) he is mostly using 1 arm, and (b) he has been rowing for less than 1 year. These examples show how adaptive programmes can provide the pathway to developing not just strong adaptive athletes, but strong athletes full stop who can contribute to other squads as well.

Maidenhead always runs a sterling regatta and this year’s event was as bright as the sunshine which broke through the string of rainy days especially with it ever increasing support for adaptive racing.

Congratulations to the winners: