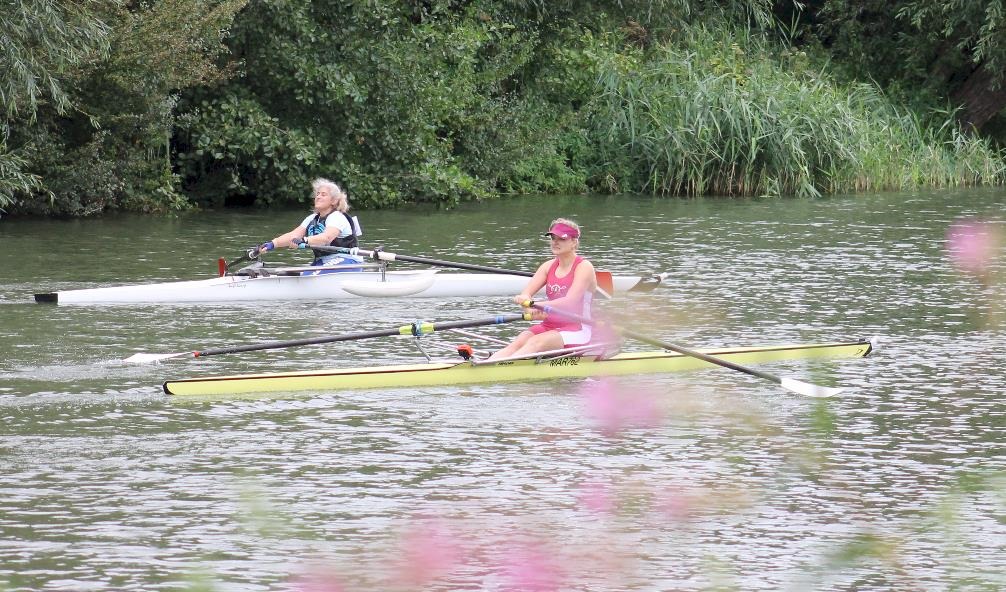 City of Oxford Regatta was the one of the pioneers of adaptive club rowing in the UK. They were one of the earliest regattas to offer adaptive events and are a key fixture on the adaptive racing calendar. A few years ago, Marlow, Guildford, City of Oxford and Stratford-Upon-Avon were having a post-event wash-up at the bar at COX Regatta and really started hashing out the problems and frustrations with adaptive racing which led to many of the adaptions (eg. supported doubles, time handicaps) that are standard today.

The whole attitude around adaptive rowing has changed from “I’ll never…” to “If only…” What I mean by “I’ll never…” is that several years ago all the racing was done according to strict PR classifications. Due to major variations in degrees of impairment within those classifications, many athletes were despairing, “I’ll never be able to beat so-and-so [or even have a close race] and so what’s the use of coming to these events…” Now people are getting beat, but the races are much closer. Ideally within a boat length and nearly half of the races at City of Oxford did finish that closely. As a result, athletes are now commenting after the race, “If only, I had steered better or hadn’t caught that crab, etc, etc., then I could have won that race.”

One of those “If only”s was “If only the time handicaps had been calculated better”. As we exercise the system more and more, we are finding (and fixing) more bugs with the system. One issue that became clear this weekend, was the difficulty of applying time handicaps to LD (Learning Disability) athletes. There are a handful of these rowers (at City of Oxford there was Roy Stanton rowing for COX and Sebastian Johnson rowing for Marlow) who are physically quite strong and their basic technique is fine, but their performance is impeded one the day by how effectively they actually row the race (steering can be a particularly acute issue). On some days, they row very fast times, but on other days they have issues which can slow them right down. Depending on which way the execution falls, they either have a huge advantage over their competition or disadvantage. One solution discussed is to make more of an effort in future events to group the AR3-LD rowers together in one group, racing off an even start and let whoever turns in the best performance of the day win.

Another curious “If only” came up in a discussion I had with Guildford’s Guy Williams, ie. “If only I had trained harder.” Guy has been about 10 seconds behind Marlow rival Ben Marsden much of the season, but due to similar times at Maidenhead, the Oxford races was set at an even start. Ben ended up winning the heat by about 10 seconds and discussing the result with Guy after, I offered that maybe we got the handicaps wrong and should have given him a 10 second headstart for a tighter finish. But Guy had a different take which was (paraphrasing a bit from memory), “Actually, I was happy with the even start. It tells me I need to get on the erg and train more. It gives me a target to shoot for [beating Ben in a head’s up race].”

So much racing resulted in a number of special match-ups. There were a number of the now traditional rivalries like Twickenham’s Benjamin Pritchard v. Marlow’s Kingsley Ijomah (Ben retained his bragging rights, but Kingsley closed the gap). Yours truly got stuck into a special “Junior Coaches Derby” pairing up with Sebastian Johnson v. fellow clubmates Georgia Walker and Marlow junior coach Enya Meadows. Marlow’s Nikki Stanton-Ketley faced Worcester’s Susannah Barnett in the Wheelchair Women’s Mixed Supported Double. Nick and Finlay Lawson of City of Oxford moved the tally in the Single-Arm Sculling Duel to 2-1 in their favour besting rivals Steve Bloyce and Nick Steel of Maidenhead.  And Maidenhead’s Dan Stevenson faced Marlow’s Ben Marsden in the Open Adaptive 1x in what was also effectively the UK CP (Cerebral Palsy) championship race (with Dan prevailing for the pot as Ben could not make up enough of the time handicap effectively balancing the severity of their two impairments).

City of Oxford continues to be one of the top events in the adaptive calendar. Their heat/semi/final structure means lots of opportunity for racing. The event also underscored how popular the supported double racing has become. Marlow entered 5 crews in the event which featured 12 crews all together. The biggest Support Double competition in the UK so far.

Another curious note about the results was the spread of success across clubs. Early every club won a pot. The most glaring omission was Guildford which was a good example of the self-balancing mechanism of the time-handicapping system. At last week’s Maidenhead Regatta, Guildford was the winningest club, but their success meant a higher bar for them this week. Even more encouragingly, the results also underscore the breadth of competitive pararowing growing in the UK.

That breadth is underpinned by a strong mutual support and community. I had several people comment on this aspect of adaptive rowing including Charmian Johnson, mother of Marlow PR3 junior Sebastian Johnson, “What also struck me about the day was the great sense of community and mutual support amongst the Adaptive clubs.” It’s true. You don’t see all the J14 or Masters E competitors sharing equipment, helping each other to boat, having banter on the water, and then hanging out together at the bar.

Special congrats to the winners

(Thanks again to Caroline Steele for her great photos below whose entire gallery for the event can be found here.)