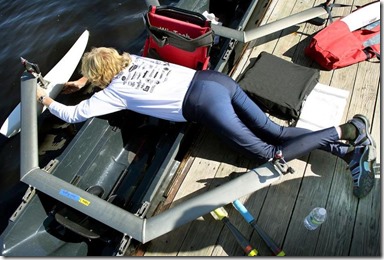 This post comes to you courtesy of British Rowing’s Paralympic Pathway Coach Ella Willott. As it happens, Ella was the one who first established the adaptive/pararowing programme at the Marlow RC including recruiting me as a volunteer to run it and coach. Like most folks at British Rowing, she wears about a dozen hats including outreach to help clubs developing their own pararowing programmes. When we met up recently, we got into a discussion about the dangers of boats capsizing with pontoons.

One would think that a boat with safety pontoons really shouldn’t capsize. Yes, the incidence of capsize is massively reduced. But the severity (the other side of the risk equation) remains exceptionally high especially when you have an impaired individual strapped into the boat if and when it tips over. Ella and I both were present (though neither involved) with the capsize at the Pararowing Development Camp she mentions below. I have also experienced pontooned boats capsizing. One was by George Bull-McLean who at nearly 7-foot tall simply had the leverage and size to tip even a boat with safety pontoons.

Ella shares her perspective on the safest adaptive boating even when safety pontoons are in place:

Following an incident at the Royal Docks in London in 2014, where an adaptive sculling boat fitted with pontoon floats capsized, British Rowing undertook thorough testing of adaptive rowing equipment. This has been followed up in the last 4 years with a further 4 adaptive-specific capsize drills, conducted with adaptive rowers. Here are the key findings and considerations drawn from tests conducted between 2014 to present day about some key parts of adaptive rowing equipment:

Regular risk assessments are important for the safety of all rowers, be they adaptive or able bodied, and the considerations apply across the board. Coaches, helpers and volunteers should assess risk on the basis of: the individual/s concerned, the environment, conditions, equipment, and so on. All adaptive rowers should be taken through a capsize drill within a reasonable and appropriate time frame of starting on-water rowing in order to manage the risks posed by the additional equipment and/or impairment of the individual rower.

One Reply to “Capsizes With Safety Pontoons”