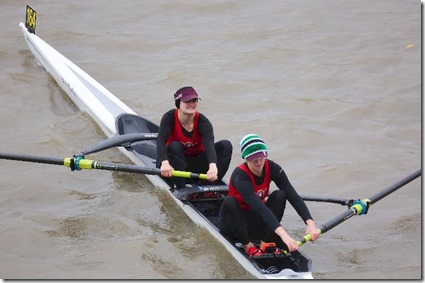 Not only did Ella Holloway and Philippa Harrison of Marlow keep the adaptive racing alive at Pairs Head this year, but they also pioneered what I think must be a UK first – Supported Adaptive 2-. Last year, Pairs Head introduced the Adaptive Supported 2x, but I don’t know of any PR3 2- races in the UK anywhere ever.

While the PR1 and PR2 classifications in pararowing do sculling in international competition, the PR3 classification does sweep rowing. The Paralympic event for PR3 is the Mix4+, but given the challenges at times to get a full complement of a Four, the World Championships also offers the PR3 2- event.

As PR3s prepare for international competition, they will often train in Pair boats. That’s the case for Ella who is part of the GB Pararowing Development Squad. She has competed with her Marlow friend and senior women’s squad mate Philippa before in the Supported 2x, but never in a pair. What better time to do so in open competition that the Pairs Head itself?

As it happens, Ella’s impairment is Erbs Palsy of her right arm.  So, sweep rowing aligns much better for her strengths and weakness than sculling.

They not only won the event (by default without any competition), but were the prevailing (and only) adaptive competition the whole day. Marlow and Guildford had entered Supported Adaptive 2x’s, but both pulled out seeing the horrendous conditions (which based on the reports of people coming off the water, it was probably a wise move).

This pair put the pair in the Pairs Head for Adaptive racing.