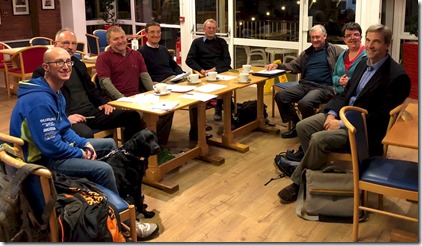 The a number of the active Adaptive Rowing coach/coordinators of the Southeast England area got together for a session to discuss how to continue to build and promote adaptive rowing in the area and the UK. Organised by Stratford-upon-Avon’s Mark Dewdney and hosted at City of Oxford RC by Rachel Lunney and Mix Dixon it included also Bruce Lynn from Marlow, Nick Steel from Maidenhead, Robert Hall from Maidenhead, Mark Sanders from Stratford-upon-Avon and Andy Weekes from City of Oxford. The initiative was “nothing official” as Mark described it, just “a group of people trying to make things better.”

A year ago, British Rowing’s Rosie Mayglothling had organised an “Adaptive Rowing Advisory Group” that met three times a year for a couple of years to provide guidance and input to a fresh look at BR’s work with adaptive and pararowing. It’s “Terms of Reference” declared as its objective “The adaptive programme as a whole has seen pockets of excellence with clubs and coaches providing great opportunities for coaching and racing. The time is right to develop a strategy for adaptive rowing to enable activities to be co-ordinated and examples of best practice shared and developed to reach a wider audience of potential rowers and coaches.”

The advisory board’s work drove and informed a number of changes and investments in adaptive rowing (eg. classification terminology, adaptive membership, outreach initiatives). Still, those ambitions are no less relevant today than they were a few years ago and in many respects underscore the initiative being taken from a more grassroots direction by Mark and the others.

Here is a link to a copy of the minutes for those interested. A few additionally take-aways that I personally noted included…