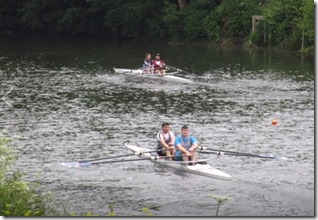 “At Hereford Regatta on Sunday 2nd June, two visually impaired rowers took part in Herefords first go at running Adaptive racing as part of their regatta programme. Brandon from Hereford raced against me from Stratford-Upon-Avon in two assisted doubles races, the second using club level adaptive time penalty adjustment system. We won a race each. A really enjoyable afternoon with great hospitality from Hereford and the start of some good knowledge sharing. The photos show both Doubles racing on the river and also receiving our pots from the Mayor of Hereford.”