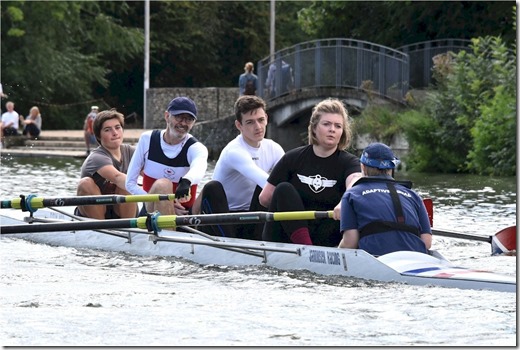 City of Oxford Regatta has long been a pioneer in adaptive racing and none less than this year. The usual packed programme of adaptive racing, 15 races across 7 events with COX’s characteristic keen support. Echoing the coming of age at the Paralympics where pararowing will now compete on the same length as Olympic rowing, COX moved the adaptive start to align with all the other races of the day. This meant a more challenging race (which the athletes were fully up for) as well as the ease of a stake start.

The logistics got a bit harried when the event had only a single safety boat for the day and the organisers had decided that every adaptive race would have a safety boat following. This safety support is essential for the 1x racing especially for fixed-seat (extra risk of problems if there were a capsize due to the strapping in), PR3-LD (more difficulty steering) and PR3-VI (need for guide for steering). But I would question the need for a safety boat for the Supported Adaptive 2x events which have a non-adaptive rower in the boat to take care of the steering and to assist with any other issues that might arise. Given some of the problems that Marlow Town Regatta experienced as a result of safety boat problems, a lesson from the day is to really think through the safety boat logistics and ensure that there is enough capacity at the right times.

The highlight of the day was the UK’s very first Supported Adaptive 4+ event (I wish I could say “first in the world” but the Head of the Charles introduced this event in 2016). The race was a challenge event with gauntlet thrown down by COX. An increasing number of adaptive rowers are looking to sweep due to left or right side impairments. And the introduction of the Supported Adaptive 2x event has brought more single-armed rowers into the sport. Furthermore, the 4+ sweep is the boat rowed by PR3 athletes in the Paralympics so PR3 athletes are often interested in this boat type. As it happens, the Marlow boat included Paralympic Champion Naomi Riches rowing with Marlow in her first para competitive race since London 2012. The biggest problem to date with racing such a format has been critical mass – ie. having enough athletes capable of sliding-seat sweep rowing to form a crew. With the growth of adaptive rowing, a number of clubs are able to achieve this (with a bit of help from some support rowers).

Congratulations to the day’s winners in the highly competitive field (the Time Handicap system had a few hiccups, but worked better than ever with 5 races finishing within a canvas of each other!)…