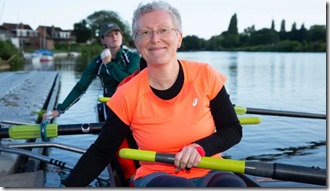 One impairment one might think would be one of the harder ones to overcoming in rowing, but which is seeing a surge in interest, is arm impairments. Another recent recruit to adaptive rowing is Emma Green who used the motivational strategy of “pre-commit” to get herself into a rowing boat. She agreed to join a charity row down the Thames in aid of Parkinsons (which she has) despite never having rowed…oh, and despite having the full use of only one arm (as a result of the Parkinsons).

Emma came down to Marlow where she has joined the adaptive squad and where and increasing amount of sweep rowing is taking place. Not just because of the increase in arm impairments (Marlow alone has 4 athletes with arm impairments), but also because people enjoy the camaraderie of crew boats and the focus (on one oar) of sweep rowing.

You can donate to Emma’s fundraising on the Cure Parkinson Trust’s site here.