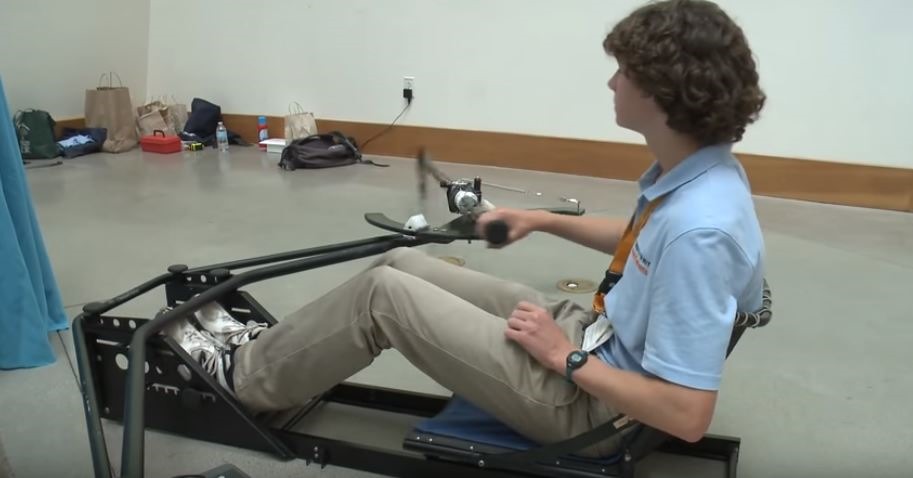 The primary use of the arms in rowing is to connect the drive train of the legs (and core with back rock) to the levers (oars) which move the boat. For a conventional rower, 70% of the power comes from the legs, 20% from the back (core and lats) and 10% from the arms. So if you have an arm impairment, you are not necessarily losing that much power per se.

But the arms (and hands that go with them in most cases) can serve some other useful functions in rowing, especially feathering. Feathering (a) reduces wind resistance against the blade spoons, and (b) reduces the chances of the blades hitting the water going back to the catch (because they have higher clearance and also because they are flat, if they do hit, they skim the water without impeding its motion as much as a squared blade would). But if you have an arm/hand impairment, the manipulation required for feathering can be a real challenge. As a result, we tend to default to square-blade rowing for adaptive rowers with arm impairments.

A high school science “InvenTeam” from Northampton, Massachusetts, USA developed a mechanism that would automatically pivot the blade to perform the feathering action based on the position of the blade in the stroke and not requiring any hand or wrist manipulation. Their website includes a small blog that provides some deeper examination of their development and testing process:

As it happens, a while back, Ben Marsden of Marlow came across a similar innovation that was featured in a YouTube video for a very simple “auto-feathering” mechanism. It was developed by a Bob Hurley in Georgia, USA using an simple string mechanism to pull the over and back over very similarly to the Northampton High School approach. One enhancement that he made was an oar handle that could, with a click, be changed from fixed to rotating. The rotating mode allows for the auto-feather function and the fixed allows for actions like manoeuvring the boat. Hurley also made a great video of his invention in action, but unfortunately he has now taken it down. It has been two years since he posted it and I have been in touch several times with him, but he has not responded to enquiries for some reason, but here is short piece about his work that was featured in Rowing News.

I actually did a bit of a patent search and it looks like a number of people have tackled this problem and filed their inventions: One Reply to “Auto-Feathering Device”