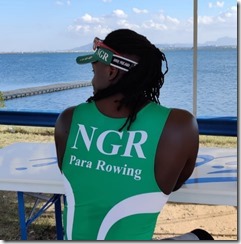 While a veteran fixture in the UK adaptive community, Marlow’s Kingsley Ijomah actually hails from Nigeria. In fact, despite moving here as a young child and being a permanent resident, he is still a Nigerian citizen. As such, his international rowing aspirations have had to be pursued under the green and white of the Nigerian flag. And he achieved his penultimate aspiration this past week winning the Mens PR1 1x African Championships and as a result formally qualified for the Tokyo 2020 Paralympics.

Thanks to some inside track connections, Adaptive Rowing UK was able to scoop this inside report from the man himself:

“My visit to Tunisia this time was very different to the first time, I would say the pressure was a thousand times more, everything seemed to depend on a win, only a single boat was going to qualify and you could see this in every athlete’s face, and not just the athletes but their coaches too, absolutely everyone wanted this so badly.”

“We are always told by our coaches to race your own race, but the doubt usually creeps in on first sight of other athletes, I saw the Libya and Tunisia rowers I competed against in the past and could have sworn they both doubled in muscle mass, they immediately shared videos of their hard training sessions, and that advice to row your race almost completely disappeared, plus there were other athletes I have never raced before such as Namibia, Sudan and Uganda.”

“I did feel prepared, I had trained very hard for this, I had brought as much as I could with me to minimize any equipment issues such as the one I had at world cup in Poznan earlier this year, this time I took my own fixed seat, boat rigger, floats and blades.”

“Tunisia was quite hot and the water was very choppy too, it took a few days to get used to it and adjust some techniques to it, on the day of the heats, I did not feel too nervous, I remained in my own headspace planning my every stroke, I have re-studied the landmarks and planned how to push off them, I was good to go! there was a strong crosswind, but that has been there for the past couple of days, so I was ok with it at this point.”

“When the race finally started it was Libya that I thought I would fight against the most, but Tunisia had swapped their PR1 athlete and suddenly there was this new athlete I knew nothing about, it was him who stuck with  me for the first 500 meters neck to neck, but I absolutely raced my own race, focusing on each stroke and I slowly started pulling away, half fighting the crosswind to remain in my lane and focusing on pushing off the other rowers. I won my heat and I felt really good about it, especially because I raced my own race.”

“So we were going straight from the first heat to finals, this is where the pressure-absolutely went off the roof, this was it, if I win this then everything I have been training for, all the sacrifice from myself and others who believed in me would be automatically justified and rewarded, I could finally say “I will be attending the 2020 Paralympics!” this is it! the qualifiers, but I couldn’t stop thinking of all the things that could possibly go wrong! well the race start was the most nervous I have ever been in my life! and I needed the bathroom so so badly! again this was new to me, never had that sort of nerve.”

“When the race started I zoned into every stroke, the stakes are very high, the dream can be made in this moment, the reward can be mine if I could just block everything out and focus, and that was exactly what I did, the last 250 meters, I remember thinking, wow! Tokyo is mine in the next couple hundred meters? I went through the finishing line and was completely overwhelmed by all the emotions, Tunisia took second place followed by a good friend of mine Aziz from  Sudan.”

“Rowing back to the landing and my need for the bathroom has become a case of emergency! as I got out of my boat into my wheelchair anti-doping approached me for a urine sample, I said follow me guys! we both want the same thing, but we need to rush right now! 😀 “

“The atmosphere of just competing in Africa has a different kind of energy to it, the laughs are endless, everyone trying to communicate with each other regardless of language boundaries, French, English, Swahili, Portuguese, Yoruba, Arabic and so on. “

“My name throughout the time I was in Tunisia was “Portuguese” as far as the athletes were concerned, this all started the first day when I said hello to the Cape Verde athletes in their language, one of them shouted Portugues? as in, do I speak their language, I said I speak just a little, and from then on when they saw me they would shout “Portugues!” and soon others joined them.”

“The first milestone has been achieved, the boat space for Paralympics is now secured, the hard work has only just begun, Sudanese coach approached me afterwards and said, ‘I know you don’t need motivational speech to work hard, but now you are not only representing Nigeria, you are the one boat from Africa continent, you represent us all and we are all supporting you all the way’ I feel very honoured to take on this duty as it were, to represent a continent in the next Paralympics and to hopefully inspire more people to go into rowing, especially Para-rowing.”

A full collection of photos from the regatta can be found here.