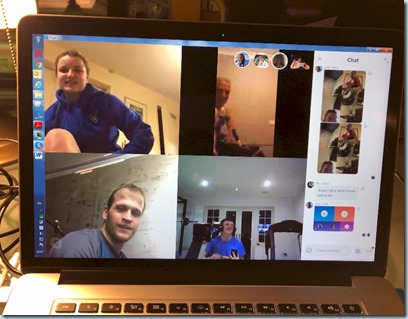 The COVI19 pandemic has scuppered all of our club competitions and training for the foreseeable future, and for some without a rowing machine at home, it has eliminated nearly all training. A number of athletes do own their own ergs, and some clubs like Marlow RC are letting their members take home the club’s ergs on loan (on an application/lottery basis since there are many more members than machines).

As it turns out, nearly all of the Marlow Adaptive squad have their own machines at home, and as a result they have been experimenting with virtual training sessions. Here are a few of the learnings for other folks that are interested in following suit:

Of course, in the virtual world, there is no distance so anybody can come together to join training sessions. Marlow’s first v-session included Mark Delahunty from Maidenhead and other joint sessions are planned. One issue is that it is harder to “get to know” people through such v-sessions. For starters, the interaction between the athletes is limited as they are sitting on their ergs and most of the communication is from the coach to the group. The squad enjoys the bits of banter among themselves at outset, during breaks, and at the finish. But it benefits greatly from knowing each other well so short quips and comments are understood and land well. If you don’t really know someone, then it is harder to make such off-the-cuff remarks and connect in this way.

Finally, if you are getting your split times down, there are a number of virtual competitions cropping up all around the world (but on the Internet it doesn’t matter where you are). There are v-regatta’s like Tennessee Rowing’s Coronavirus Quarantine Regatta. Also, Concept2 has introduced it 2020 Spring VIII Series which features a number of “challenges” that you can take on as a part in as a squad.

See you on the safe and civic-minded digiverse!