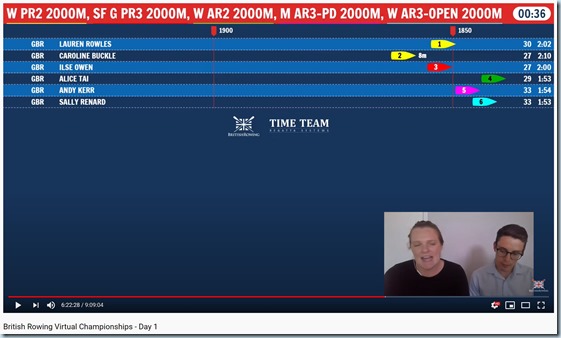 It takes more than a global pandemic to stop the British Rowing Championships. In fact, from an Adaptive/Para perspective, the competition has never been more exciting. In the past, Brit Champs has always been a bit of an awkward affair for Pararowing. The event supported it, and British Rowing brought many of its GB athletes to compete. But the organization on the day never seemed to gel as well as it could.

But enter the British Virtual Championships, and everything it changed. Instead of a handful of athletes participating in a few time trials or races, the event included 27 Adaptive and Pararowers rowing in 21 events. Obviously, a number of “row-overs”, but also a testament to the diversity of participants (ie. so many categories represented).

Despite being hosted by British Rowing, the event welcomed participants from around the world and the Para/Adaptive section featured entries from Italy, Romania, Ukraine, Israel, Belgium and USA. The powerhouse, as is often the case for the indoor pararowing competitions was the Invictus squad which brought all but 4 of the athletes competing. Two of the others were from Team GB (including Paralympic Champion Lauren Rowles), and the other two were from club pararowing powerhouse Marlow RC (see full table of results diectly below).

Special connection with the Concept2 rowers allowed the athletes to see their position in the race (see photo at bottom). But it wasn’t just the racing that embraced digital sophistication, as top flight live commentary made the event exciting not just for the athletes but also for the spectators. And if you missed the event, BR has posted 18 (!) full hours of coverage on the British Rowing YouTube channel. The time markers for the Adaptive / Para events are as follows:

As the pandemic lock-down provisions start to ease, many sports continue to be further back in the queue for relaxation. Sports represent a high risk of contagion (bodily fluids like sweat and respiration) on equipment and in close proximity, as well as a relatively low priority for (as the sport of rowing itself has proven, there are isolation opportunities for fitness even if they are not the activities you enjoy the most). It is great that the sport is demonstrating so much resilience and commitment to carrying on with creative solutions. One Reply to “British Virtual Championships”