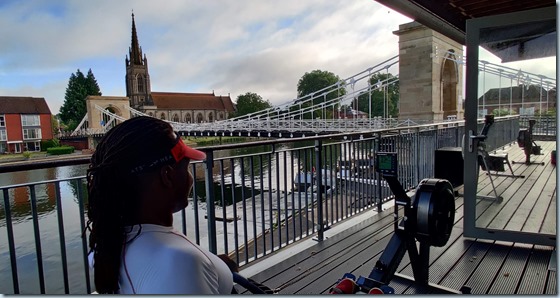 With approaching 6 straight months of indoor lockdown training (mostly on the rowing machine), Kingsley Ijomah and Naomi Riches of the Marlow RC adaptive/para squad decided that a mere marathon (or half) was not nearly enough erging in one day. And so they decided to more than double it to the Century Challenge – 100,000 metres in one sitting (joined by Sally Hopewell also doubling her, and the UK WPR1’s long-distance mark for the full marathon).

· Kingsley Ijomah (PR1), who has qualified to row in Tokyo next year for Nigeria completed the Concept2 Century (100,000m) in 10:27:10.2. His is now ranked No1 in the world and is the only PR1 Male to have completed this distance since Concept2 online records began in 2002.

· Naomi Riches MBE (PR3-VI) completed the Concept2 100,000m in 7:50:55.8 making her the only PR3 female rower to have ever tackled this distance; and this season she ranks 5th female in the world in non adaptive categories.

· Dr Sally Hopewell (WPR1) previously set the mark for the Concept 2 Half-Marathon earlier, took on and completed the Concept2 Marathon (42,195m) in a time of 6:40:46.8. This makes Sally the only PR1 Woman in the world to complete this challenge this season, the only UK pararower to ever complete the challenge, and the 3rd fastest PR1 woman to have completed this distance since Concept2 online records began in 2002.

The hearty and hale pararowers had this to say about their experience: