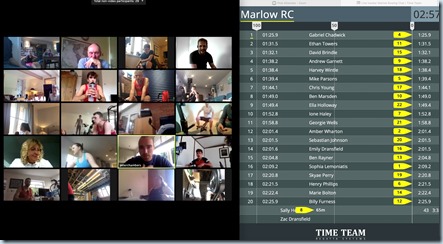 You don’t need to participate in an international competition to have some online virtual racing. Marlow Rowing Club has invested in Time Team service to run a weekly intra-club erg 500m spring competition for all squads including the Adaptive/Paras. It is actually especially fun for the adaptive/para squad because we get to participate with all the other members of all types and abilities.

When the club “championship” was run, they pulled together the best times for each squad and ran a time handicapped race taking a page from the adaptive innovation to level the playing field and make for a competitive and inclusive event.

Another innovation that came from the Adaptives was the “Closest to the Pin” contest. The competitors have to hide their screen, put the erg on “Just Row”, and row until they figure they have rowed exactly 500m. It makes for a good warm down as accuracy, not effort, is the key. Each week, we have had a few people come within a couple of metres of the 500m. In fact, pararower Kingsley Ijomah holds the club record in the event for hitting 500m on the button. Actually, the whole adaptive squad at Marlow garnered sort of a reputation for being extra strong in this event which we put down to the fact that we do lots of 500m pieces in training.

The real-time Time Team racing is accompanied by a club Zoom session that has had as many as 50 club members spectating the event. In the first lock down, the club just did the pieces over Zoom and the athletes reported their scores at the end, but the Time Team system adds a real engaging boost to for the athletes and the spectators. And it is great practice for the various remote competitions who are all using the same system for their events.