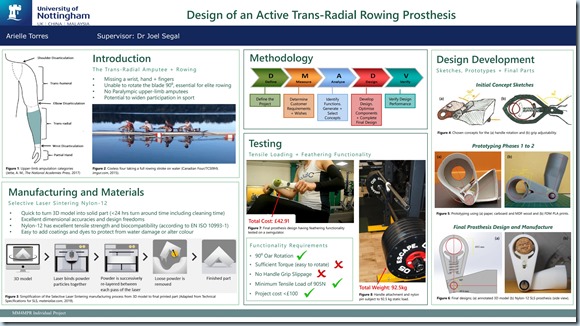 Arielle Torres developed a transradial rowing prosthesis as part of her final project for her master’s in Mechanical Engineering at Nottingham University. Once she had developed a prototype, she approached Marlow RC’s BEA PR3-PD Kirsty Mason to provide user feedback and functionality testing. Kirsty had employed a number of adapted prosthetics for other adaptive sports she participated in especially weight training.

The biggest challenge to a rowing-optimised prosthetic was (a) repetition, and (b) degrees of freedom:

Arielle’s research represents a major piece of work to document the challenges and considerations as well as a number of solutions attempted. In the end, the pandemic lockdown last year meant that Kirsty could no longer go on the water so further testing, feedback and refinement of the device was not feasible. Nonetheless, Arielle has kindly shared her work with Adaptive Rowing UK here so others investigating possibilities in their area can benefit from it.

Here is a copy of the report “Design_of_an_Active_Transradial_-_Design_Report_12_April_2019” (and here is its Appendix) for reference. One Reply to “Arm Prosthesis Research for Rowing Adaptation”