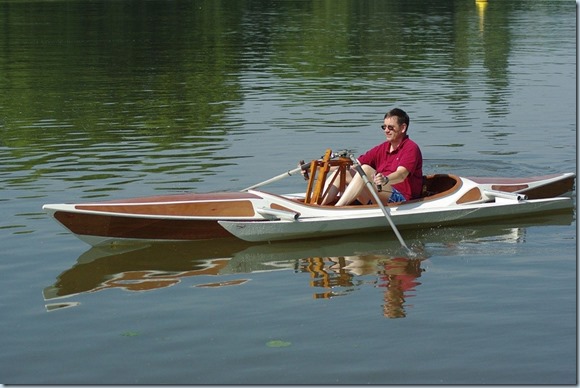 Rowing is physically one of the most inclusive sports there is. This is because it is a whole-body sport. As a result, if some part of the body (nearly any part) is impaired, you can still use the rest of the body to move the boat (another sport with this characteristic is swimming which does feature an incredible range of disabilities in its paraswimming).

I’ve asked myself if there was any limit to the minimum function you required in order to participate in the sport of rowing. We know that lower limbs are not an issue as the upper body can be used. The one scenario where I didn’t see any way around was lacking function in both arms (rowing with one arm is quite commonplace). It seemed to me that you needed some limb to connect the blades to the person (whatever muscles they were going to use to create movement).

I’ve mused about “no arm” rowing. I have even rigged up a strap on a rowing machine for a no-arm rowing drill when I coach J14 juniors (to get them focused on leg drive and core strength). But I never figured out a way to take this approach to the next step of effective water rowing.

Well, now I have come across the “FrontRower” system which seems to not only have cracked “no arm” rowing, but also could be very useful for a range of impairments (thanks Sally). This clever contraption defies explanation with any sort of economy so I recommend watching the video below. It’s not a cheap solution coming in at just under £2000. And it is designed more for a recreational canoe, but talking with the maker it would seem to work with a wide-body (adaptive boat) with its riggers off (see how the mechanism provides all the blade support and riggers would just get in the way so you would like want to get something like the Wraptor Balance which is an extra £400). A final concern is that you don’t have much power (after all, we are talking about an extreme level of impairment for this device) so you do have to be careful with currents.

But on the bonus plus side, you do get to see where you are going (it is a front facing system)!