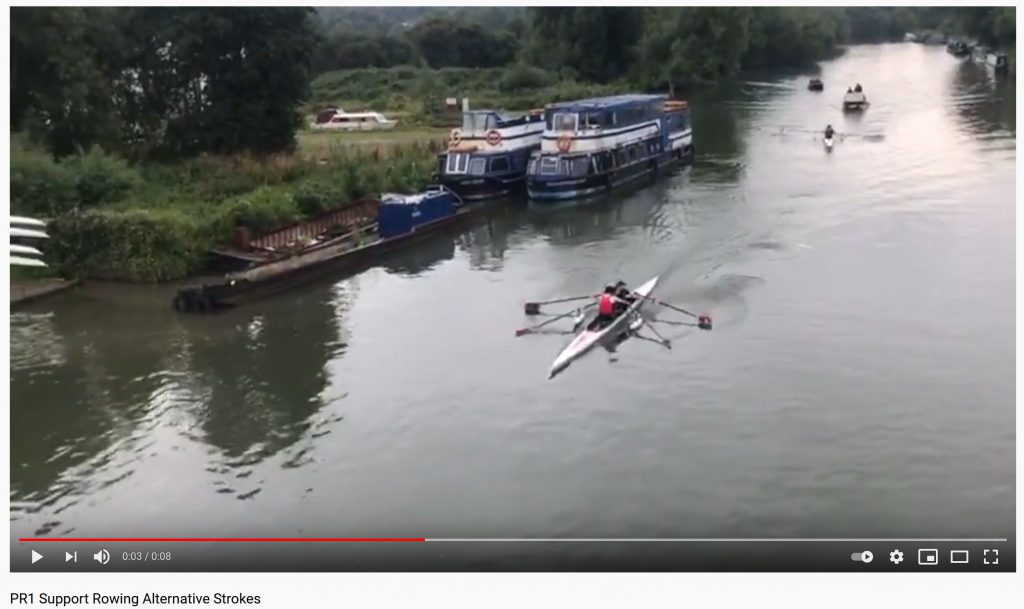 When we talk about “adaptive” rowing, most of the time we are referring to equipment adaptivations, but equally important are technique adaptations. And with the huge popularity of the “Supported” format, adaptations by the support rower are just as critical (in fact, more so since the support rower sits in bow and, especially being less impaired, is charged with following the adaptive rower).

Possibly the most challenging supported adaptive format is the PR1. Being a fixed seat with a limited range of motion, the support rower has to change their stroke considerably. With all mixing of physical capabilities, one of the key objectives is “in together, out together”. This imperative can be especially challenging for a support rower used to rating in the 20s now rowing with a PR1 rower who typically rate in the 40s! I still remember the frenzy of me trying to keep up with Sophie Brown (Sudbury) supporting her in a 2x at the Bedford Small Boats Head).

Different support rowers adapt different adaptations to their stroke technique. Yes, the PR1 will typically take their rate down a bit. But still, the support rower just won’t be able to complete an entire conventional stroke in the time that the PR1 does theirs. Some support rowers simply shorten everything proportionately to match the PR1. Some try to keep more of the full leg power (use as much slide as possible), but short the back rock and arm finish much more.

Paul Thomas of Marlow pioneered a completely different PR1 approach supporting Mari Akhurst-Duward at the City of Oxford Regatta. When I titled this post “Alternative Technique”, I wasn’t just referring to the new option, but I was also describing the technique itself. Paul decided to row only alternate strokes to Mari. That way, instead of 2 short, compromised strokes to match hers, he was able to put in one long, strong stroke. He felt that one good stroke was better than 2 weak ones for his contribution, and as a team it was easier to sync their contributions.

It seemed to work well as Mari and Paul secured a win at the event. Possibly the Dick Fosbury of Supported Adaptive Fixed-Seat racing!