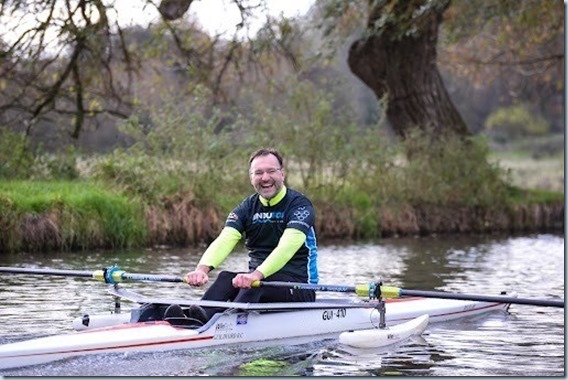 Last January, Steven Dowd organised a monumental world-wide fund-raising rowing challenge to get people of all abilities rowing together and raising funds to support disabled sport – the EnduRow Challenge. It was such a success, he decided to repeat the feat. This time, in addition to the indoor rowing, he decided to go a step further and learn to row in a boat. I put him in touch with the folks a Guildford RC who have one of the leading adaptive programmes n the UK (as well as a static body of water making it easier to get on the water in the wet winter months). In addition to penning a piece about the latest EnduRow, he also shared his experience of learning to row in the piece below:

“I’m not Rower. It’s is one of those elite sports. You have to go to the right school, have the right Income, know the right people and then you might stand a chance of getting into a boat. Oh, and I have a spinal cord injury. Paralysis, exertion and cold water don’t mix well!”

In a few short sentences I gave 3 compelling reasons why I’d pass over rowing as a sport. I was also wrong… 3 times!

Following my traumatic spinal cord injury in 2016, where a broken neck in a low-speed cycling collision resulting in total paralysis below that point, I used sport and exercise for rehab and made a remarkable recovery. A series of Charity Challenges which followed were all sport-related as it helped my recovery enormously but also engaged others to raise awareness and funds for spinal cord injury research like the experimental clinical trial that I benefitted from. They ranged from static-cycling, skiing and running to a 3-and-a-half-day Everest-sized stair climb during lockdown (a first for a walking-quadriplegic). Together tens of-thousands have been raised and hundreds of people have taken part together. I couldn’t be more proud of every participant that took them on with gusto. 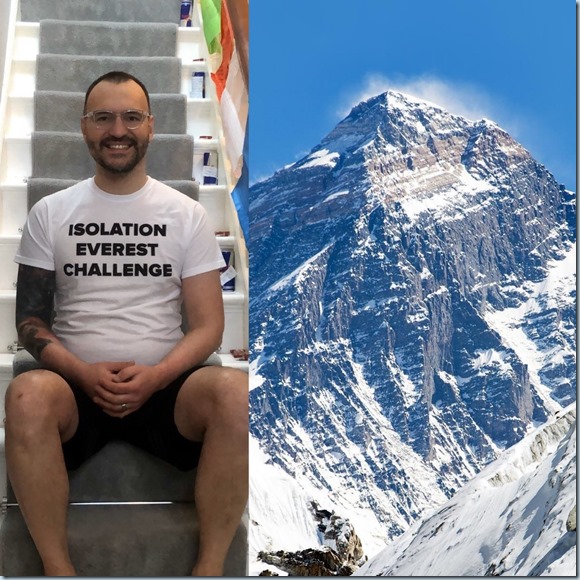 After literally and figuratively summiting my personal Everest I committed to design and deliver a new global community challenge that could include everyone everywhere. Regardless of who they are. Regardless of where they live. Regardless of their abilities. A fully-inclusive and fun fundraiser that would socially connect the World whilst offering a serious endurance challenge for those seeking it and an opportunity to raise some serious cash for a great cause.

For this new concept – a ‘global community event where everyone around the world could simultaneously complete an endurance challenge together’ – to work I needed a vehicle. Something ubiquitous. Something accessible. What could I harness to bring people together?

That’s when I discovered the indoor rower. Could this scary, alien machine actively avoided by most gym-goers and that I could potentially hurt myself on – or, even worse, look silly whilst hurting myself – really be the answer? Eureka! I found it!

A motif of previous Challenges was to give myself 200 days to design and deliver an ambitious event. This one was no different so I did the calculations and worked out that the first Sat in Feb ‘21 was to be the day for the World’s biggest, live, fully-inclusive, indoor rowing charity fundraiser. EnduRow Challenge was born; a 4-hour live-streamed indoor row.

Start together. Row together. Finish together.
Replace competition with camaraderie.
Replace metres with minutes.
Everyone. Everywhere. Pulling together. 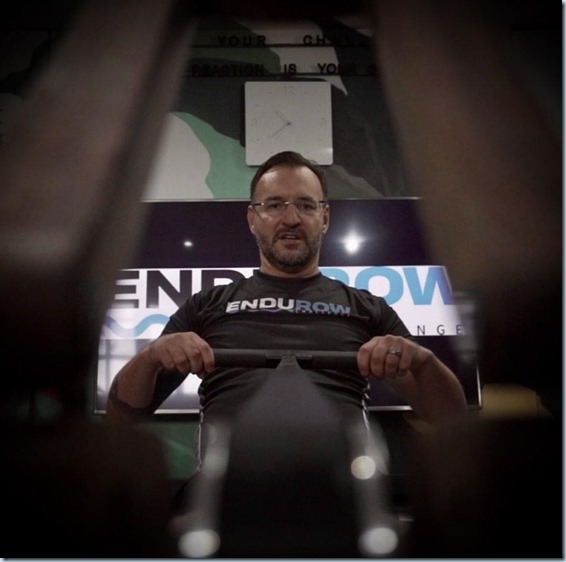 I won’t lie, it wasn’t easy taking this bold, ambitious goal into a community I knew nothing about nor anyone in. I used to lead recruitment at BNY Mellon before my injury so flexed those old muscles, picked up the phone and networked around the globe to gain support and momentum from the likes of British Rowing, Rowing Australia, USRowing, various nations’ Olympians and Paralympians, Coastal, Offshore and TransOceanic rowers, World-Record holders, rowing clubs and plenty of ‘normals’ too at clubs and youth groups.

Skipping through a Rocky-esque montage of vast amounts of time, hard work, video calls and all the behind-the-scenes operational fun of delivering an event like this, we made it to event day along with 1000 participants across 11 countries and raised £27,000 for Wings for Life spinal cord injury research foundation… all during a global pandemic! A huge success by any measure. Immeasurable thanks to all that made it happen! Without everyone’s extraordinary support, it would’ve flopped.

Reflecting on my opening paragraph, during the journey I realised a few important things…

EnduRow Challenge 2021 was such a success that we doing it again in 2022.  Join us on 5th February 2022 @ 1200-1600 GMT. This time we are all fundraising for PARA ROWING FOUNDATION; helping athletes with impairments globally become the best athlete they can be through rowing.

Whilst you can tune in and row at home (MicRow) we are encouraging everyone to row at a venue together with friends/family (MacRow) where safe to do so. A party within a party! Ask your club, school, gym, workplace etc to loan you a space and some ergs and set up your own MacRow… because it’s really fun together! 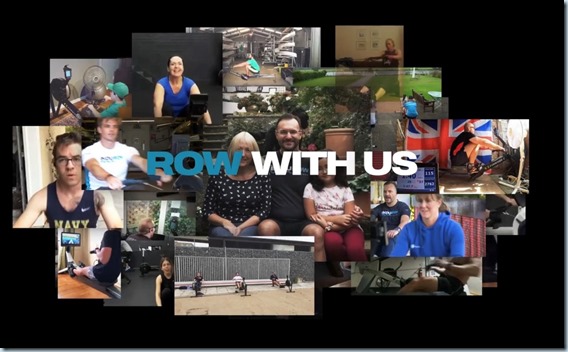 Can’t picture it? Here’s what a MacRow looked like on Australia’s Gold Coast:

If you’re hosting a MacRow, to get a free recruitment poster emailed to you for your noticeboard or newsletter please email Crew@EnduRowChallenge.com 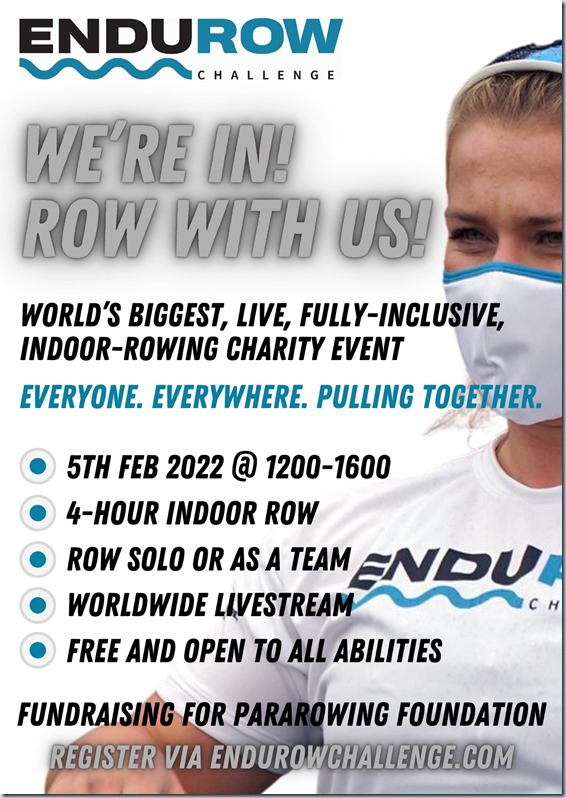 Whether club Presidents, competitors on the world stage or just your average rower, almost everyone I met insisted that at some point I should get into an actual boat. I had multiple offers from generous people inviting me to go out with them so they could experience my ‘first-timer smile’ as they once wore. So, that ‘first-timer smile’…

As an impaired person looking to explore adaptive rowing in the UK there is one name that crops up time and time again. Coach Bruce Lynn at Marlow RC. You’ll know him well, I’m sure! Everyone seems to.

Bruce was supportive of EnduRow Challenge the first time around sharing it with the adaptive community through AdaptiveRowingUK.com. At the time I was a first-time indoor rower so very much focused on my static rowing technique and building strength on the erg but in recent weeks I began to get the itch to ‘try the water’ and ‘see if I could’.

I had a video call with Bruce who immediately introduced me to the wonderful guys at Guildford Rowing Club who have a great adaptive offering and are one of the oldest adaptive-capable clubs in the UK. I got an almost immediate response from Chris Boys (who, coincidentally, took part in the first EnduRow Challenge!). He quickly understood what I wanted to do and a date was set for that coming Friday morning, weather permitting.

It was all so fast.

After a light breakfast, I excitedly hopped into the car for the 40 mins drive from my house. My wife Helen and I snaked through the country lanes out of West Sussex and into Surrey as the sat nav picked out the quickest route to the boathouse. What a gorgeous little scene awaited us. 800m of windy river, a canal lock to the far end and a weir.

Although we’d not yet met I recognised Chris from the previous Challenge’s livestream so shook hands with him and his crew (Steve Wright, Ian Pigram and William Pigram) before they showed us around. 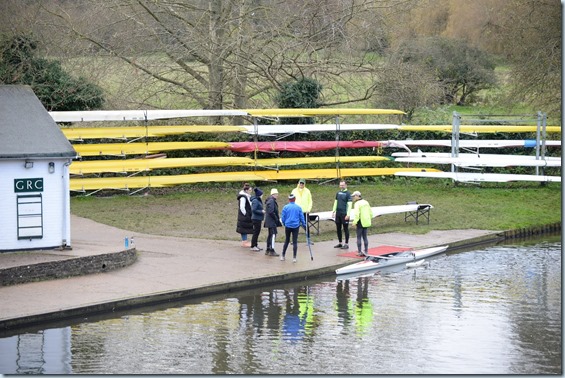 Two rows of five neatly lined up ergs sat in the boathouse. All identical Concept 2 machines. My Coach for the day, Robert Hall, who rowed that stretch of the River Wey for 60 years, asked me to hop on one and warm up “…to see how you move”. As I settled into a rhythm at 20spm he said nothing. 500m in he piped up, “OK, I’ve seen enough!”, spun around and walked away towards the riverside smiling. I wasn’t sure if this was good or not but I trusted him to know what I needed. I carried on pulling at a slower rate for a couple-hundred more metres whilst chatting to the others around me then ventured outside to the dockside myself to see my sleek red-and white Wintech single scull.

She looked big! I felt small!

The pontoons were attached and I was helped into the boat. That was surprisingly easy. Only a single wobble toward the water the other side meant I avoided an unintentional blend of rower and water. As I tried to plant my butt cheeks into the sliding carbon seat, I couldn’t really feel it – part cold and part lack of nervous sensation – so, inevitably, it shot forward and I landed on the rails behind. Shaking off a little embarrassment and with a quick adjustment I was positioned correctly. I was given some stone cold safety instructions about flat blades for balance and some warm encouragement which calmed my nerves. Taking hold of the ‘skinny’ Concept 2 oars, with my thumb covering the end cap as instructed, I pushed away from the bank and out into the river. Just the water, the boat and me. Floating. Weightlessly.

From the side, Rob instructed me on the basics and together we managed to rotate the boat 360 degrees. It came relatively easily which brought a contented smile to my face and left me facing the right way for the next crucial moment… my first stroke.

I was concentrating so hard on what was about to come I missed Rob’s actual words but it was clearly some form of “GO!” so without moving my legs I gently reached the oars forwards and placed the blades into the water behind me. I connected with the resistance and eased them back into my hips. The boat immediately responded and I glided silently backwards.

Training on the erg from Naomi Riches during ZoomErgos sessions beforehand kicked in and I automatically raised the blades from the water, retuned to the catch and repeated the stroke. I continued to glide. No smile yet though. I was deep in concentration-ville.

As the stroke count increased so too did my speed and my confidence. Before long I began to engage hip drive and then eventually my legs. Constant checking and correcting between me and my Coach on the bank took any fear out of the equation as we continued along the river at what felt like a decent clip. I was stopped a few times by being too close to a weedy bend but otherwise hogged the centreline.

It was here, in the middle of a beautiful river on a serene and crisp morning surrounded by ancient trees, in a boat I was wholly in control of, that it happened. Sheer joy welled inside me and spilt over. The ‘first-timer smile’ spread across my face and I understood what it was about. Luckily there was someone on hand to capture it.

Now I have the basics enough to move around I’m looking forward to spending many years perfecting the stroke.

I’ll be mixing it up as we approach EnduRow Challenge ‘22 but no matter whether I’m out on the water or at home on the WaterRower my smile is just a little bigger because of this experience.

Now it’s your opportunity to row, and smile, with everyone everywhere. Join us on 5th February 2022 for an amazing experience.

Sign up at EnduRowChallenge.com today and let’s pull together.

One Reply to “EnduRow Challenge 2022”