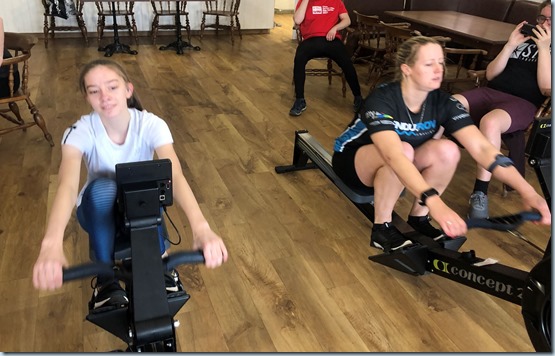 “Hearing impairment” is not included as a classifiable impairment for either “adaptive” (AR) or “pararowing” (PR) classifications. But as you can read below, our guest contributor, Helen Cooper, finds the adaptive/para rowing squad especially suited to support the issues that her impairment presents so that she can enjoy the sport the most fully. And, she is also able to compete as Marlow couples her with a classified athlete (not hearing impaired so that they can provide the hearing for the boat) and so Helen rows as a “support” rower in “Supported Adaptive 2x” competitions:

I’ve only been rowing for about 10 months now but, I feel like I have been part of the Marlow RC Adaptive Squad for much longer. I was welcomed into such a wonderful group of people where it seems like everyone understands one another, even though we all have different disabilities or support someone who has a disability. When I come down to the club sessions I feel included and not a minority, knowing that I won’t have to face adversity from people who don’t understand how my deafness, ADHD and sensory processing difficulties affect me.

Training with the adaptive squad is much easier for me than training with a large group as, being deaf in a boat means communication is harder between the coach on a launch and myself and also with my rowing partner when in a double. I can’t wear my hearing aids on the water as they aren’t waterproof so it’s nice to be part of a group of people who understand that I cannot hear well especially, as lip-reading in the boat can’t happen because my partner doesn’t face me to communicate and with the surrounding sounds from the boat and around myself added on top increases the difficulty in hearing. It is also hard for me to tell what my coaches are saying from the launch when they’re at a distance so it is helpful that they come closer to me and use arm signals to communicate. When out on the water training, it’s great that there is a small number of us per launch allowing for more direct coaching and less chance of thinking that the coaches are talking to myself, when they actually trying to coach another person! I also have no ability to tell where the direction of sound is coming from so when another boat calls to myself to let me know that I’m approaching them, I won’t be able to tell where it is coming from and what they are saying, this might lead to clashes in the future and so the launch following me knows that they will have to be closer to myself and use signals to communicate especially when I might have to suddenly stop the boat – of course this only works well when agreed signals and phrases are used! At regattas it is useful if coaches can explain my needs to umpires, for example, when racing I need to have flags used to start them so I can tell when to go because it’s hard to hear what people say through megaphones sometimes.

In other sports I have previously participated in for a long period of time, I have felt left out, ignored and had not much effort put into me because no one took the time to adapt their way of coaching me and understand how being a deaf neurodivergent person means I take longer to process some things, unless I hyper-focus on the skill or activity! This led to the past sports not being as enjoyable for me to take part in. However, rowing is different; rowing on the water is very calming even when working hard as I’m surrounded by nature and it enables me to not think about anything else that is currently happening, giving me some much needed time when I’m just present and not overthinking something that’s coming up like school exams, it’s basically freedom from my anxious mind that has too many thoughts constantly popping up.

The great thing about doing adaptive rowing is that everyone is willing to help each other to make participating in rowing more accessible and adapting to everyone’s needs, whether that is just getting someone’s oars as they can’t reach them because they are hanging up too high, adjusting footplates if you struggle, holding boats when getting in or out of them and even constantly coming up with creative ideas to make something that isn’t working, work! For example, when on the erg I was overextending my knees when at front stops so we put a clamp on the rail, in front of the footplates which meant when coming up to the catch I wouldn’t be able to overextend because I would otherwise hit the clamp and make a loud sound. Another great thing is the sense of community, when out at competitions you get to socialise with other local adaptive rowing squads and share ideas that they have done to make rowing easier for them because of different or similar impairments. It also seems like you know nearly everyone from at least one other squad and it’s great to just chat and have fun together after racing is finished – we even have shared cake when celebrating someone’s recent birthday at a regatta before!

One Reply to “Can You Row with Hearing Impairment?”