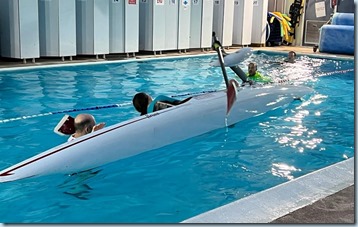 Marlow Rowing Club recently experienced a PR1 capsize in the river which was attended to promptly and successful, but did highlight a number of learnings. These learnings we integrated into the club’s revised “PR1 Policy” which included an updated and more comprehensive capsize drill for PR1s and capsize rescue training for PR1 safety supervision. This post shares overviews of the following for everyone’s reference:

It’s quite a long piece (probably my longest), but full of useful information for any PR1 athlete or coach.

Marlow RC recently held its annual club capsize drill which included a special PR1 capsize section. The drill was not just to train and test one of the new PR1 athletes, but also to formally train two of the adaptive squad supporters (Paul Thomas, David Duckworth) as well as to simply continue the ongoing process of testing a number of PR1 capsize and recovery techniques.

The athlete drill went through the following progressive steps:

Then, we moved on to the Safety Supporter training. This training is focused on righting an upturned boat that a PR1 athlete has been unable to extract from. Our current assessment (which was informed strongly by the British Rowing capsize drills we attended) is that the first recourse is to attempt to right the boat. With the correct technique, all but the smallest person trying to right the largest athlete can get the leverage to accomplish this maneuver. It is the quickest and easiest way to get the PR1 athlete above the water. And even in the situation where the boat cannot be fully righted, we found that it could be “half” righted quite easily (it’s the second half that’s the hardest). “Half” righting has the huge benefits (a) allowing the athlete to get a fresh breath of air, and (b) providing strong reassurance to the athlete that things are under control and he will get sorted out (see below).

The steps in the capsize training for Safety Supporters were as follows:

BACKGROUND – Tom Mann suffers from MS which has progressed to the point that he now uses a wheelchair.  Marlow RC has an extensive adaptive/pararowing programme established for 8 years with a broad range of equipment and support rowers/coaches.  Tom joined Marlow RC in June to learn rowing for fitness and recreation.  Squad Coach Bruce Lynn conducted an in gym assessment when he arrived as well as a water assessment in a single.  The PR1 boat used was unsteady because the pontoons did not reach the water and Tom had difficultly managing the basic stroke.  As a result, it was decided to coach him in a 2x boat with a coach (Bruce) in bow for 3 sessions to teach him the basics of the rowing stroke.

While that teaching technique was effective for providing boat stability, it produced a number of problems of getting the set-up just right.  The 2x boat does not have PR1 riggers and so when you have a PR1 in a supported 2x, it takes quite a bit of finagling the get the blades set up so they can move in a roughly PR1 fashion.  This challenge was compounded by his somewhat exceptional height (6’ 4”) which further limited how the seat could be set up in the 2x.  While Tom had come a long way in managing the technique (in his last session, he had gone 2k), it was felt that the 2x format was hindering his progress and the decision was taken to put him into a 1x where the set-up could be customized for his requirements.

SESSION – The session started off slightly breezy, but when Tom set off, the conditions were ideal – calm, little stream, sunny, warm air, warm water.  The session had strong support coverage with 5 support/coaching launches on the water for 5 boats (1:1 coverage).  Tom was paired with Dr. Paul Thomas, a highly experienced veteran sculler who has been supporting the adaptive squad for a number of years and has experience coaching PR1 and even rowing as a support rower for PR1 (and even innovated with how PR1 support rowing was done – https://adaptiverowinguk.com/index.php/2021/09/16/pr1-support-rowing-alternative-technique/).  Bruce checked Tom’s set up, briefed Tom and Paul on the eventuality of a capsize.  The safety pontoons were set at the absolute lowest (into the water) setting to provide the most stability.  Tom was the last athlete to set off and Bruce followed Paul and Tom at the outset to make sure that he was starting off okay.

RISK ASSESSMENT – The Para coaches are always performing risk assessments and the following considerations were made when boating Tom and determined that the risk of capsize was acceptable:

About 100 yards setting off from the dock, Tom let go of one of his blades and when reaching for it capsized the boat.  Paul immediately went alongside the boat to assist and not seeing Tom out immediately, went into the water to assist by using the “pull” technique (ie.  get on one side and lever the boat to right it – https://adaptiverowinguk.com/index.php/2021/11/02/fixed-seat-capsize-drill-br-updated-tutorial/).  Tom clearly had not been able to remove his straps and so by levering the boat, he was able to get a breath and then Paul and Tom continued to work on extraction.  Seeing the capsize, Bruce moved immediately to join the assist (Bruce was 30 meters away).  Seeing that Tom had not immediately extracted himself and Paul was not able to immediately right Paul, Bruce also went into the water to assist and Tom’s boat was turned upright.  The entire time from capsize to righting was probably under a minute.  Upon righting, Bruce and Paul checked Tom’s situation and while a bit flustered he was in good spirits.  The major thing we noted was that Paul’s seat rails had nearly wrenched off from the pressures of the righting and his considerable size (ie.  100kg).  A third safety launch driven by Chris Johnson had arrived and Bruce and Chris transferred Tom from the scull to the safety launch.

Paul described the capsize in more detail are follows:

WHAT COULD BE BETTER

One Reply to “Marlow PR1 Capsize Drill/Training and PR1 Policy”